Skip to primary content
Skip to secondary content
Sometimes, It’s the Storm That Saves Us
Rev. Reebee Girash
The Eliot Church of Newton, UCC
August 19, 2018
Audio Recording, including the hymn before the sermon, and the Liturgist’s reading:

John 6:1-21
After this Jesus went to the other side of the Sea of Galilee, also called the Sea of Tiberias. A large crowd kept following him, because they saw the signs that he was doing for the sick. Jesus went up the mountain and sat down there with his disciples. Now the Passover, the festival of the Jews, was near. When he looked up and saw a large crowd coming toward him, Jesus said to Philip, “Where are we to buy bread for these people to eat?” He said this to test him, for he himself knew what he was going to do. Philip answered him, “Six months’ wages would not buy enough bread for each of them to get a little.” One of his disciples, Andrew, Simon Peter’s brother, said to him, “There is a boy here who has five barley loaves and two fish. But what are they among so many people?” Jesus said, “Make the people sit down.” Now there was a great deal of grass in the place; so they sat down, about five thousand in all. Then Jesus took the loaves, and when he had given thanks, he distributed them to those who were seated; so also the fish, as much as they wanted. When they were satisfied, he told his disciples, “Gather up the fragments left over, so that nothing may be lost.” So they gathered them up, and from the fragments of the five barley loaves, left by those who had eaten, they filled twelve baskets. When the people saw the sign that he had done, they began to say, “This is indeed the prophet who is to come into the world.”

When Jesus realized that they were about to come and take him by force to make him king, he withdrew again to the mountain by himself. When evening came, his disciples went down to the sea, got into a boat, and started across the sea to Capernaum. It was now dark, and Jesus had not yet come to them. The sea became rough because a strong wind was blowing. When they had rowed about three or four miles, they saw Jesus walking on the sea and coming near the boat, and they were terrified. But he said to them, “It is I; do not be afraid.” Then they wanted to take him into the boat, and immediately the boat reached the land toward which they were going.

There were storms in the North Atlantic that winter, storms so powerful that all of the fishing boats returned to their harbors. The night of January 23, 1973, every local fishing boat was in dock at Heimaey, the largest of the Westman Islands, four nautical miles south of Iceland’s coast.

Then, in the middle of that dark winter night, the fireworks started. Or at least, that’s what Gerður Sigurðardóttir’s children thought they were hearing from their home uphill from the harbor. Why would there be New Year’s fireworks again so soon, they wondered? Why set off fireworks in the middle of the night?

Gerður opened the curtains to look outside, and saw, four hundred meters away, a pillar of fire. A massive, burning fissure in the earth.[1]

In 1973, there were no seismic warning systems in Iceland to tell you when the volcano in your back yard was about to erupt.

Lava and the ash were coming right for her home. She grabbed her children and the baby’s bottle and ran down the hill, to the harbor.[2]  Where the fishing boats were.

Civil defense crews drove through the island, their sirens blaring, calling everyone out of their homes.  In the basement of a town building, leaders met to figure out how to evacuate an entire island of five thousand people.

But the crews of the fishing boats didn’t need a plan. They knew they had to get people off the island, fast. So they extended hands and ropes and gangways and shouted: get on the boats! The fishing boats had to leave harbor before they were trapped, and so did the people, so they squeezed everyone they could onto the boats, and sped away from the harbor. A half hour after the first terrible sounds of the eruption, the first packed boat was off on its four-hour journey through stormy waters to the mainland. Six hours later, the last boat left. A plane came for those who unable to withstand the stormy boat trip. A courageous few hundred stayed behind to save what could be saved. Only one person was killed by the eruption. Out of five thousand, only one person fell victim to the volcano, because the boats were there, ready. You might say, the storm at sea saved five thousand people.

You might want to know what happened to Heimaey. 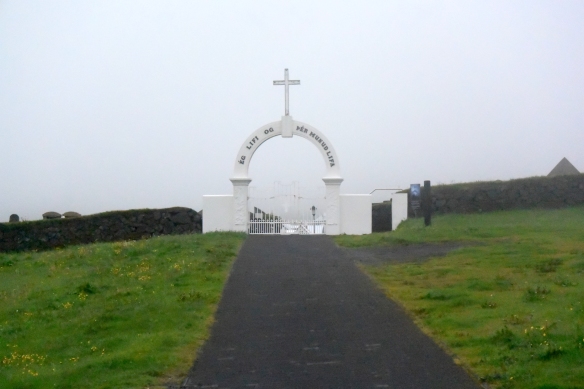 The eruption lasted several months. Civil engineers came up with an ingenious idea: to use fireboats to spray seawater to control the direction of the lava flow. The harbor was saved. Ash and tephra were shoveled off roofs by hand. The island grew in area by 20% and there was a new mountain in the middle when the eruption stopped six months later. The islanders, and the fishing boats, returned.

They have excavated the home of Gerður Sigurðardóttir, one of the first structures hit by the lava.  When they were building a museum around her house, she came back home to reach into the rubble and pick up the artifacts of previous lives. Lives saved by a storm.

This summer our family stood in that museum, and we walked the slopes of Eldfell, the new volcanic mountain. We saw the homes, excavated and repaired, and the fishing boats, back in the harbor.

When evening came, Jesus’ disciples went down to the sea, got into a boat, and started across the sea to Capernaum. It was now dark, and Jesus had not yet come to them. The sea became rough because a strong wind was blowing. When they had rowed about three or four miles, they saw Jesus walking on the sea and coming near the boat, and they were terrified. But he said to them, “It is I; do not be afraid.” Then they wanted to take him into the boat, and immediately the boat reached the land toward which they were going.

The Greek reads something more like, he said to them, I am. Don’t be afraid. I am. The Gospel of John has a lot of I am statements by Jesus: I am the bread of life; I am the living water. I am the way. But here, he calms his followers just by being. Just by his presence. I am. Be not afraid.

There haven’t been many people who’ve seen him walk across water. Indeed, most of us are a little skeptical about the whole walking on water, feeding five thousand from five loaves thing. We translate the miracles into metaphors. Paul tells us that God’s power is far more than anything we could ask or imagine, but what we ask and imagine has pretty narrow limits.

Marcus Borg had an invitation to us, skeptics. He wasn’t exactly a biblical literalist himself – rather, he studied the historical Jesus with a strong scholarly lens. But for the skeptics, he offered a third way: to move “beyond belief to relationship.” If you think about it, belief probably mattered less to Peter than relationship. In the boat, in the middle of the stormy lake, it wouldn’t have helped calm him down if a stranger had walked across the water. It mattered that it was Jesus, his teacher, his friend.

In Heimaey, the fishing boats were crewed by islanders. By neighbors and brothers, cousins and friends. When they called out, get in our boats, the terrified islanders heard the voices of friends, calling out: It is us. We are here. Don’t be afraid.

Some of us have been listening to the music of Aretha Franklin this week.

When she recorded Rodgers and Hammerstein’s show tune, You’ll Never Walk Alone, Aretha Franklin stamped it with a profession of her own faith:
“Walk on, through the rain, though your dreams be tossed and blown…. walk on, with hope in your heart. You won’t ever – God won’t ever – I know that God won’t ever let you walk alone!”

This is the promise of our faith, the promise that we professed to young Catie this very morning. We are, each and every one us, precious to God. God knows every hair on our heads, God knew us in the womb. And God who loves us will not leave us alone. When the storms come, God is present in the support of our neighbors and family and friends. God is present every time someone calls out to us, get in my boat.

This is what we hope Catie will know, growing in faith. She is a beloved child of God. She is loved and precious in God’s sight. She is a beloved part of this community and the whole community of Christians. And God won’t ever let her walk alone. Whatever storms come, and whether it is Jesus walking across the water or the fishermen calling her onto their boat, she will not be alone.
I’ll close with a prayer Marian Wright Edelman lifts up in times of storm and struggle:

“Lord, please help us to hang on.
Please don’t let us give up.
Help us to remember that, like the sun in the morning, You come when it’s time.”